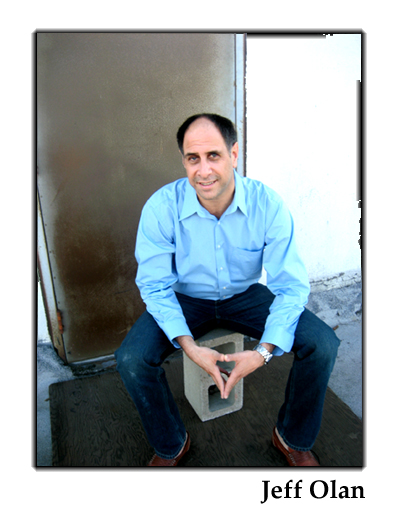 Jeff Olan, the owner of JEFF OLAN CASTING, INC. is a native of Munster, Indiana, born to Estelle & Sol Olan. Jeff comes from a large family and has seven nieces and nephews. He has been involved extensively in a multitude of areas in film, television, stage and radio.

Mr. Olan embarked upon his career as a communications and drama major at Indiana University appearing in several stage performances. He was an active member and graduate of the famed “Second City” comedy troupe based in Chicago and served for two years as a nighttime disc Jockey on WJOB in Hammond, Indiana.  He also became a popular on-air radio personality for “Olan’s Casting Report” in the mornings on K-EARTH radio (101 on the FM dial) in Los Angeles from 1984 to 1986 during which time he interviewed many distinguished guests from the film and television Industry.

On December 11th, 1984, Mr. Olan participated in a contest living on a Billboard overlooking the famous Sunset Strip in Hollywood, California. He lived there, perched on the billboard, for six months until June 6th, 1985.  As one of the original “survivors,” he received national and international attention including appearances on “Good Morning America”, “The Today Show”, “Entertainment Tonight,” an article about him in the “TV Guide” (June 85 with Nancy Reagan on the cover), and print media in over 50 countries for this stunt. Johnny Carson made a reference to the billboard sitters in one of his nightly comedy routines and Jeff Actually got the honor of sitting at Mr. Carson’s desk on his last day of “The Tonight Show”.

Mr. Olan continued to work in the entertainment field professionally as an actor and appeared in several television programs and feature films. His many credits include the daytime TV soap operas Days Of Our Lives where he played a reporter (NBC), “Capitol where he played a studio stage manager (CBS), the nighttime episodic TV show The Facts Of Life playing one of the lead girls boyfriends (ABC), the feature film Best Of The Best 2 playing a security guard, the CBS movie Donor playing a paramedic, as well as playing a cop on the original Nightmare On Elm Street directed by Wes Craven.

In addition to his acting career, Mr. Olan utilized his vast talents in the area of production to become a production coordinator for an Independent Commercial Company. He created, wrote, and co-produced a syndicated television show “Caught In The Act”, and was able to acquire the last taped interview from Bill Gazarri of the famed Gazarri’s on the Sunset Strip in Hollywood, California- who was responsible for the rock bands “Guns & Roses”.  In 1999, Jeff started production as a producer on the cult feature film “Holy Hollywood,” which stars the legendary actor Mickey Rooney, Tony Tarantino (father of Quentin), Tony Leach (writer of the animated feature film “Hoodwinked”), and also features the late Sal Pacino (father of Al), Amy Linker (star of 80”s TV series Square Pegs with Sarah Jessica Parker, Gil Espinoza (Actor/Casting Director who now works with Jeff Olan), and Estelle Olan (Jeff’s mom).

In 1992, Mr. Olan Co-founded and was one of the senior partners of Rainbow Casting in Los Angeles, and some of his personal credits with that company include Academy Award Winner Pulp Fiction directed by Quentin Tarantino (starring John Travolta & Samuel L. Jackson), The Net & Gunshy (both starring Sandra Bullock), The Good Girl (starring Jennifer Aniston), George Of The Jungle, Jackie Brown, and the popular TV series My So Called Life for ABC.

At the end of 2001, the partners of Rainbow Casting went their separate ways, and in early 2002, Mr. Olan opened the doors of Jeff Olan Casting, Inc. His exemplary reputation in the business with not only his talent, but with the producers, directors, cast, and crew that he works with has allowed him and Jeff Olan Casting to become one of the leading Independent casting agencies in the motion picture industry. Jeff Olan also served on the board as Vice President of the Valley International Film Festival (www.viffi.org) for five years to promote independent filmmaking.

Jeff Olan is a co-star on the film Strictly Background (www.strictlybackground.com) that revolves around ten extras trying to make it in the very tough, but rewarding entertainment business.  He is also a developing producer on a few TV shows as well as a feature film. Jeff enjoys exploring different things and always says, “If we knew our fate it wouldn’t be life”.